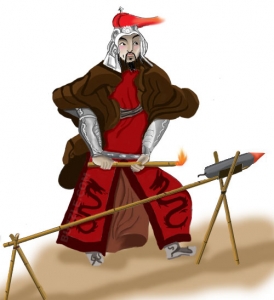 Fireworks are an ancient tradition that dates back to 7th Century China and have been used since to mark important cultural festivities. Discovered by accident by a Chinese cook in the formulation of gun powder, the earliest forms of fireworks were composed of only three ingredients, saltpetre, sulphur, and charcoal.

Though first used to mark important cultural celebrations, legend has it that it was none other than Marco Polo who brought the invention to the Middle East millenniums later where it was eventually brought to England during the Crusades and to the Americas in the 18th Century.

The same compounds of saltpetre, sulphur, and charcoal would continue to be used to develop firepower for the next 500 years, but the invention of what we now recognize as the modern firework owes its origination to the Italians who began manufacturing them for religious ceremonies as early as the 1400s.

In the 1830s, Italian chemists added colouring to the explosions and experimented with oxygen to make them burn longer and brighter, and from that what we now recognize today as fireworks was born.

A Part of Canadian Heritage

On July 1st, 1867  the British North America Act, known today as the Constitution Act was established. Along with Military Displays, musical entertainment and the ringing of Cathedral bells; Fireworks were used to celebrate the confederation of Canada!

From the first Canadian celebration of our independence, Fireworks were used rejoice and memorialise. Fireworks have been used for centuries for this very reason and to this day they remain an integral part of Canadiana. Below are just a few other cultural, religious or internationally recognized celebrations in which fireworks are used :

Consumer Fireworks have increasingly gained popularity in Canada and are used by families to celebrate any one of the events listed above.  For years Canadians have built family and neighbourhood traditions around fireworks to commemorate or celebrate various events.  Some popular examples of these traditions may include: